Infrasound is considered to be  audio frequencies below the range of human hearing. This is typically sound vibrations below 20 Hz. We humans have a relatively limited audible range. The human ear has a general hearing range from about 20 Hz to about 20,000 Hz. We’ve just evolved to use our other senses. You know those dog whistles that we can’t hear but we feel it shoot through our ears? Well low frequency sounds affect us in a similar way. We can feel them vibrating in our heads. Our tiny hairs within our ears can still pick up on them, but we can’t distinguish it as a distinct sound. The way we detect infrasound is not fully understood but it is believed we feel it’s vibrations rather than “hear” it. Low frequency sounds may be either man made or caused by natural sources. Some natural sources include, weather changes and barometric changes, lightning, volcanic eruptions, the waves hitting the shoreline, and even meteors. man made sources may be caused by machinery, cars, and especially fans or turbines pounding the atmosphere. The biggest variable between natural and man made infrasound levels is natural sources remain constant in intensity whereas man made sources fluctuate in their intensity. This is why it is always important to get baseline readings when entering a location. Take notice of fans, machines, windows, even a busy highway nearby may cause higher ambient infrasound. So why does this concern us, the paranormal investigator? Infrasound has become the latest hot topic when discussing “psycho-physiological interactions” between infrasound and human perception. Like EMF, recent studies have shown a link between infrasound and the appearance of apparitions, shadows, and other visual paranormal phenomena. It can also induce psychological reactions such as dread, fear, and the feeling of being watched. The most famous study regarding infrasound and the link to the paranormal is titled “ The Ghost in the Machine” ( The Ghost in the Machine, 1998, Tandy & Lawrence ) 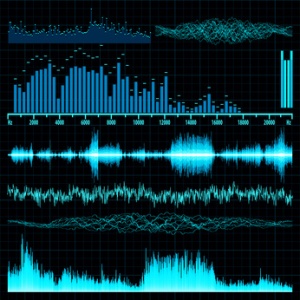 The story goes something like this.. Tandy was working in a warehouse type building. Coworkers seemed to have a feeling of dread or discomfort in one part of the building and refused to work in that corner. One evening, Tandy found himself working alone in the building. He was getting ready to compete in a fencing competition. He needed to work on one of his fencing foils. ( picture the three Musketeers swords ) He placed it in a vice. When he turned around, he noticed the tip was bouncing up and down wildly! Some unseen force was making this foil vibrate. By moving it’s position, he found the amount of vibration would increase or decrease. Tandy discovered a faulty fan that was causing a steady vibration of low frequency sound that while he couldn’t hear, it was strong enough to affect solid matter in the room. Tandy proposed that exposure to infrasound at a level of around 19 Hz would induce psycho- physiological sensations that were perceived as paranormal experiences. He claimed he could create conditions that artificially caused a paranormal encounter. He based this not only by his own studies but by research conducted by the United States military and space programs. The claims were at a level of 19 Hz, the eyeball would vibrate leading to visual effects that could be interpreted as paranormal. Tandy’s hypothesis was tested in what was called the “Haunt” Project. (Bunton-Stasyshyn, Davis, French, and Haque )  Using Infrasound along with high EMFs, the experiment was to create an artificially “haunted” room. Specifically, the experiment sought to determine if exposure to infrasound in conjunction with electromagnetic fields could lead to reported anomalous sensations, compared to baseline conditions. Participants spent nearly an hour in this “haunted” room and reported their experiences. Many involved in the study ( 79%) reported experiencing dizziness or unusual sensations. These are often linked to infrasound exposure. Other participants said they could feel someone else in the room with them (22.8%) . So should we worry about Infrasound? The problem is not so much the existence of low frequency wavelengths in a location altering our perception but the ability to accurately measure such wavelengths. One must be able to accurately measure a room. Then one must figure out if the vibration is a traveling wave, such as what happens when someone shouts across a room, or is it a standing wave, one that has a continuous output of vibration and is trapped, bouncing back and forth through the room. The equipment to measure infrasound is not cheap, either. Then there are weighting filters to discuss, sampling rates to correlate, and it’s not just infrasound that starts giving you a headache. The point I’m trying to make here is yes, infrasound has been shown to somehow alter our visual perception and give us the feeling of the Heebie Jeebies.  I think in the case of something that may be difficult to accurately measure such as infrasound, always keep external factors in mind when something occurs that may initially seem paranormal. Be as scientific as you can by eliminating as many variables as possible in a location. I think in this instance, the best way to experiment with infrasound is to take out the human element in a location. Set up an experiment and bombard a location with infrasound for a set amount of time, I’d say at least 20 minutes. have digital recorders and camcorders running. Then remove all infrasound and take measurements again. See if anything anomalous occurs during the time you filled the area with infrasound. I think being away from the effects of these low frequency waves is the best way to determine if paranormal activity increases in it’s presence and not your imagination.